New York was not as tempting as say a ‘Niagara Falls’ or ‘Great Wall of
China’ but the Statue of Liberty symbolizes USA and hence it was sort of an item somewhere in the list that needs to be ticked, whether it is worth 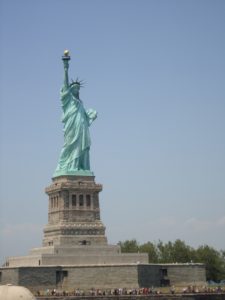 The we got the subway tickets for 8$. The subway network and its functioning was very good. There were 3 layers of trains routes and between them they connected the city well. On the sides of major roads there will be steps down leading to subway train station. Amazing public transport connectivity. We had to go downtown and the trains 4, 5 and 6 went there.

We reached Battery station and took the tickets for Liberty Statue Ferry for 12$. The wait for the Ferry was about an hour and 15 minutes. The Ferry took us to the Statue. It was nice seeing the symbol of hope and freedom but nothing much to do in the island. In fact the view was much better from the ferry. 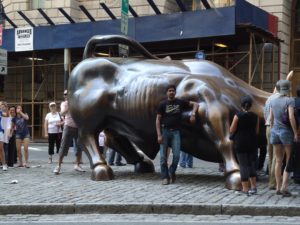 By the time we were done with it and returned back after another wait for the Ferry, it was already 3.30 PM. We were both exhausted and hungry too. But I wanted to see Wall Street and so we checked it out along with Trinity Church and the ‘Bull’ of New York Stock Exchange. We then took the subway to reach 14th Street Union Avenue and walked till 27th Street in Lexington avenue for an amazing food at ‘Saravana Bhavan’. I had South Indian Thali and it was the best Chennai food in US so far. The ‘Kaara Kozhambu’ was exotic. We then walked back to 14th Street and took the subway to Grand Central (Later we realized that 23rd and 28th street had subways – probably on the sides).

From Grand central we took Train 7 to get to Times Square. It is like our

‘Pondy Bazar’ market in Chennai or ‘Sunday Market’ back in Pondicherry but more hi-tech. After walking there for some time we realized that US could be crowded too and messy and polluted and chaotic and ‘not follow rules’ and on and on… We bought T-Shirts there and were back to subway by 7.15. We reached Grand central in time to catch the 7.48 train to White plains. I took the car out at 8.30 and we reached hotel back at 11.50.

It was a nice trip but more of a must do thing when we are this close to ‘New York’. I would remember having been and walked in Wall Street more vividly than seeing Liberty. More so I will remember the chaotic city, buzzing with Car horns and madness which most other cities of US don’t seem to recognize in their hypocritical behavior. From now on if someone comments about our Bangalore Traffic being chaotic they should first go and have a look at New York and then come and speak about India and Bangalore.

When there were talks of me going on an official trip to Canada, the first thought that sprang was – will I get time to go to Niagara falls. Along with 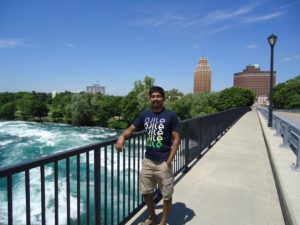 Grand Canyon, Niagara falls was there on my list of ‘must-see’ in US. The scheduled date of travel was somewhere in January and there was a consensus that Niagara might be frozen during that time. Eventually a lot of things happened and my travel got pushed to June. Not only that, the travel destination changed from Canada to Andover. Still the falls was not out of plan as there was a US side of it – 7 hrs drive from where I was put up.

Two more colleagues (Bhanu and Parthiban) expressed their wish to go and the plan was made. We started at 5.15 in the morning and reached by 1.30 P.M after stopping for mini breakfast and lunch. On the way GPS 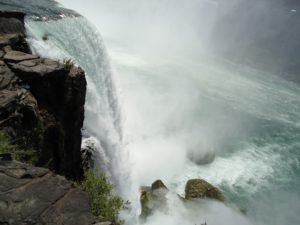 cranked and we had to do some debugging on it to get going.

The first falls was rather a small affair but the horse shoe falls was amight one and was more like the photos and videos we have come to see of the Niagara. There were a couple of rides – Cave of the Woods and Maid of the mist. The first one takes you to below the falls and you can even stand right under the falls and get some water splashed on you. The water hits you after falling on a rock and the speed and pressure considerably reduced. Even so, the force is unimaginable. It was great fun. The maid of the mist is a boat ride which takes you quite close to the horse shoe falls and you are drenched in the mist of the falls. That is another amazing experience.

The only sour point was that we 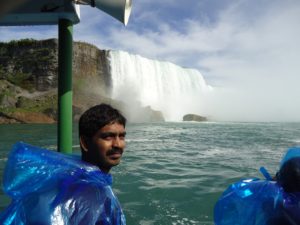 paid 10$ on a ‘Niagara Falls’ parking which turned out to be a ‘False’ parking set up by some local guys to lure the newbies (mostly desis fall trap to this) to pay 10$ rather than a free or subsidized parking elsewhere. We saw a few more of these ‘Falls Parking’ on the way.

We had dinner at ‘Kohinoor Indian Restaurant’ where the food was very good. We started at 6.15 P.M and reached at 2.00 A.M. We had driven close to 1500 Kms on that trip and if I look back at it, it surprises me a lot. Back in India I take 7 hours to go from 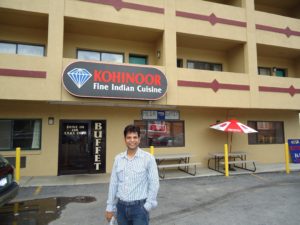 Bangalore to Pondicherry which is just 300- kilometers. All in all it is a trip that we will remember for a long time to come…

So when was my last public post, let me see – hmm when I was in San Diego. Do I get more time when I am not in India and actually amidst all the pressure.

Btw, the trips don’t mean much to me except that I have lost the following, My daugter’s birthday, My wife’s birthday, My own birthday, Diwali (festival of lights), My best friend’s sister’s marriage and now another good old friend’s marriage. Things that I can’t think of replacing ever in future. Sigh..

Lamenting aside, I am sort of used to these trips now, more practical in my approach and well prepared if you can call that. I have got three books with me to finish. I will be in Korea in another couple of weeks. Will write about it too..

After an amazing trip I am heading back to India. Bye Bye San Diego !!

No-oooooooooo!!! Not again. I am going to miss my daughter’s birthday for the second consecutive year. Well ‘kadamai azhaikuthu’. So no other choice. On the positive side I am getting another camera and planning to go to Sea World too (Last time when I was in Irvine, I gave Sea World a miss, postponing it for another time and it has been a wise decision). But all the fun only after the successful completion of the reason I am here.

This is my second visit to Andover, Massachusetts, US, but much longer than the earlier one and thus enabling me to look more closely at the people and their customs.

The first thing that strikes anyone from India will have to be the quality of roads and the driving pleasure here that is almost non-existant back in their city. The single most astonishing fact was the adherence to the traffic rules and regulations. I was amazed and it was not just staying behind the line when a RED is flashed in traffic signals, but respecting the STOP signs put everwhere and following a simple but effective protocol on who should move next. Even in the middle of the night and with no one around people still follow these rules almost regularly and as a habit. The roads are damn good and what more, even roads already in excellent condition are being maintained regularly.

The other striking thing that I noticed was the weather report. Not only was it surprising to see so many people interested in the day’s weather, but more so to note that the weather predictions are BANG right on target. When they say, it rains, and winds come and go as predicted with utmost accuracy in their speeds and timing. What more the channel predicts weather for the week ahead. I cannot smile when I think of our weather predictions for the next 24 hours that miserably go wrong.

The way unknown people greet you with ‘Hi, how are you doing today?’ is another unique thing. The first time around, I had a doubt that the person might be familiar to my colleague, but then I learnt to do the same. It felt good.

Work wise, I was in for another surprise as people rarely stay late and by late I mean 8.00 PM. People usually leave around 5.30-6.00 PM and when we go to the car parking at around 10.00 PM (average time that we leave) we find that there are just enough to be counted with our fingers,and the place usually holds close to 250 cars easily in the mornings.

Food was a weak point for me but that is highly subjective. I am not complaining because for the type of food that I expect I will have to bring my wife with me! Every type of Non-Veg was available albeit in a different flavour from Chicken to Lamb, Fish to Shrimp, Turkey to Beef, Pork to what not. I did have a great time in a restaurant called ‘Bollywood Grill’, ‘Mysore Veggie’, the later especially as it was run by a tamilian from Karaikal and had some original ‘Sada Dosai’ and ‘Pongal’ varieties. The surprise in American restaurants was that we have to wait in the entrance while a server/waiter will guide us to the table.

From what I have seen, the americans look a lot more planned, but monotonouly so. We even joked that if we were to upset their planning they might not know exactly what to do then.

Of course, don’t take this post as some measure of my patriotism, it has nothing to do with it. This is a view of an Indian who happened to visit the US and sharing the same.